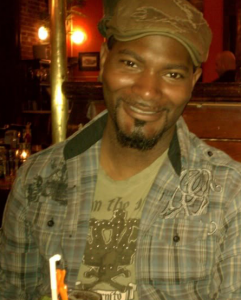 Born and raised in New York City, now living as a transplanted writer and artist in Los Angeles. A coast to coast creator whose influences span the spectrum of comics from superheroes to horror, to personal, biographical tales of lives, loves, and dreams pursued. Other influences that shaped the tone of his work include the gritty, multi-colored street canvases of the Harlem Graffiti scene of the late seventies and eighties, the works of Gustav Klimt, and the poetry of many other artists too great to list here.

When not speaking about himself in the third person, Guy can usually be found sleeping on his studio floor, a just finished script blinking from the bright light of the computer screen above and a half painted canvas acting as both bed and pillow while he rests up for the next art show or collaborative project lurking just along the horizon.